This week I decided to try a good old fashioned Sunday roast, Regency style. The recipe for Roasted Chicken with Egg Sauce comes from The Experienced English Housekeeper, 1786.

Ingredients.
1 good sized roasting chicken. Mine was
about 1.5kg or approx. 3lbs. 2 X 125g of butter. I bought a block of butter and cut it as I needed it. 5 tbsp plain flour. Gravy mix. I cheated and used instant gravy, but feel free to boil up the neck and gibblets and make gravy from scratch.2 hard boiled eggs.

Vegetables for the roast. My husband only demands the following for roasts. Potatoes, parsnip, carrot, broccoli, brusselsprouts, cauliflower, pumpkin & onion. He is a simple chap who thinks Christmas lunch must have at least 7 different meats.
Duck fat (if you can find it, usually in the butter section of the supermarket). I have seen too many Jamie Oliver shows and thought I would put this in with the chicken and roast potatoes.

Method. Take 3 tbsp of the flour and after sifting it (or not…no I didn’t ) sprinkle it over the chicken. Melt 125g of butter (approx. ½ a pound) and pour this over the flour. Next time I will put some dry herbs into the flour. Put some of the duck fat around the chicken. Cut up one of the onions into quarters and put inside the chicken.(you could use stuffing if
you wanted instead). Put the chicken (uncovered) in the oven for the usual time you would roast a chicken. Around 218C/425F for an hour and 20 mins.Cut up the potatoes and put a few dollops of the duck fat in with them. Put
them in the oven. I put them down on the bottom of the oven and move the tray up with the chicken later.Cut up the rest of your vegetables. I put the pumpkin, parsnip ,carrot and another onion in a roasting pan, covered them with foil and then put them in the oven about 30 mins after the chicken and potatoes went in. When the chicken is 10 mins from being ready, take the foil off to allow the onion to brown (it is a criminal offence in our house not to burn the onion on the top). The broccoli, cauliflower and brussel sprouts I steamed on the stovetop. Cut the chicken up, serve the vegetables and make the gravy. Put the egg sauce on top of the chicken. 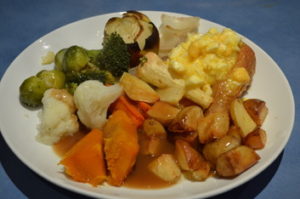 The Egg Sauce.
Boil the 2 eggs and let them cool a little.
Cut them open and slice up the egg white (roughly). Then take a fork and flake
the egg yolk. Mix them together in a gravy boat or a bowl. When you have the
chicken and the vegetables all cooked and ready to be served, melt another 125g
of butter and mix this in with the eggs. You can put a couple of tbsp of flour into the mix at this point to thicken the sauce. Spoon the egg sauce over the meat. (make sure you do this when the butter is warm).