‘This is Paris, you need to stuff your face with macarons until you cannot breathe.’ 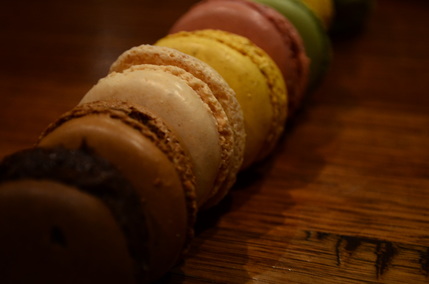 Macarons. Those sweet, mouth-watering confections are France’s gift to the world.

Macarons are often mentioned as having been first invented in the eighteenth century, but they actually date back to the fifteen century, arriving in France from Italy. Catherine de Medici is rumoured to have brought Italian cooks with her when she married Henry II of France.

It was however, only in the mid nineteenth century that the tradition of putting sweet filling in between two almond macarons was first established, and this was most definitely something which belongs to France.

The flavour of fillings in the modern macaron spans the spectrum from the traditional chocolate, though salted caramel and onto the elegant delicacy of green tea. In the recipe below we make chocolate filling, but you can use any seasonal fruit to make the jam or even cream.

How to make French Macarons

Chocolate filling (you can use jam, cream or any other sweet filling).

Mix caster sugar and egg whites with an electric beater until stiff.

Sift the icing sugar and almond meal. Add the pinch of salt.

Fold this dry mixture into the egg and caster sugar mix with a spatula until it is smooth. Take care not to over mix this, you don’t want it to be over runny.

Using piping bag, pipe the mix onto non- stick paper lined baking trays. Before putting the trays into the oven, give them a tap on the bench to prevent your macarons from cracking.

Bake in the oven for 20 minutes.

To fill your macarons (you can eat them without filling but I love the sweet taste in the middle of them).

Bring the cream to the boil and pour it over the chocolate, wait a minute before stirring the ingredients together. Allow the mixture to cool before piping onto the macarons.