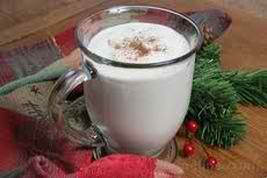 This is a drink which dates back to the Middle Ages. It crossed the Atlantic with the early settlers from England.

The original eggnog recipe included brandy, but during the American Revolution, the enterprising colonists substituted rum. Modern variations of eggnog also include non- alcoholic versions and even custard (great over Christmas pudding).

In a large bowl, whisk the eggs and the sugar together until mixture is slightly foamy.
Mix the milk and cream in a pot and bring to a simmer.

Take it off the heat and mix half of it into the egg and sugar mixture.
Whisk in the rest of the milk and cream mixture and transfer the whole mixture back into the pot and put back on the heat.
Stir and heat until the mixture thickens, but do not let it come to the boil.

Remove the mixture from the heat and add the bourbon, rum, and nutmeg.
Serve warm with extra nutmeg on top for garnish.